Firefighters were called to the blaze on the Toneway at 4.15pm yesterday (Friday).

A Devon and Somerset Fire and Rescue Service spokesman said the vehicle was well alight by the time it was tackled by firefighters.

He added: “The vehicle and highway sustained damage, and the cause of the fire was deemed accidental ignition. Duty of care was left with the police.” 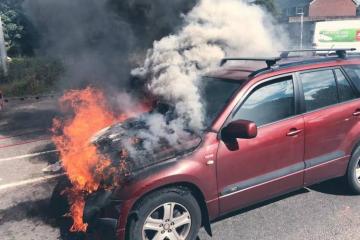