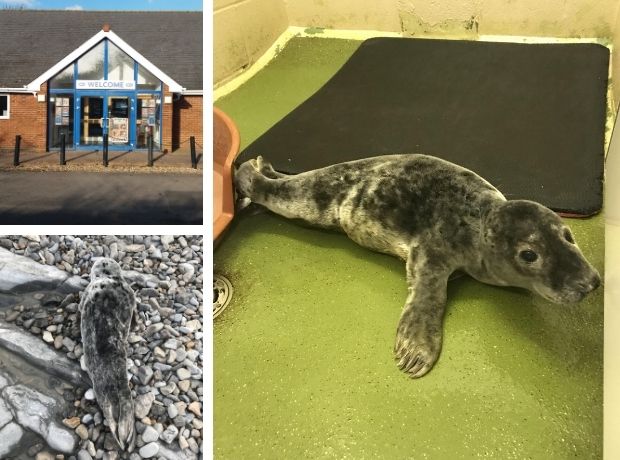 A STRUGGLING young grey seal has found a new home being cared for in Taunton after it was rescued by RSPCA on the Welsh coast.

Members of the public found the seal huddled under a rock at The Knap, in Barry, and contacted the RSPCA for help on Thursday, October 22.

The seal was very underweight and debilitated, and the RSPCA suspect the animal has likely just left his mother and was struggling to adapt to the wild.

The seal has now been transferred to specialist wildlife facilities at Taunton for rehabilitation and care, ahead of an anticipated return back to the wild.

Seals being treated at the West Hatch Animal Centre this year are being named after herbs and spices, and Inspector Sophie Daniels – who has previously hosted pop-up vegan food nights in her spare time – has nicknamed the animal “Parsley”.

RSPCA inspector Daniels said: “This poor seal was very disoriented – and was found huddled and hiding by a rock at The Knap in Barry.

“We think the youngster has been struggling since separating from his mother – and clearly needed our help.

“He’s been transferred to specialist facilities in Taunton, where we will rehabilitate him and hopefully soon return him to where he belongs – the wild.

“I thought Parsley was a great name for this little chap – and this was another good rescue to be involved with; as saving seals is certainly part and parsley of the job!”

Ms Daniels thanked the “amazing public” who rang the alarm and contacted the charity about the struggling seal.

“A huge thank you must go to the amazing public, who spotted the seal’s plight – and also were so helpful and supportive during the rescue,” she said.

The RSPCA has also issued a reminder to the public as to what they should do if they see a seal in trouble.

Inspector Daniels added: “If a young seal looks fit and healthy and shows no signs of distress, we’d urge people to monitor the animal closely for 24 hours – while of course adhering to any Covid guidelines.

“An unhealthy seal pup looks thin, but not bony, and has a visible neck, like this seal pup had.

“The public should avoid approaching seals and keep dogs away on a lead – as these wild animals can have a nasty bite.

More advice on what to do if you find a seal pup in need of help is available on the RSPCA’s website.

A £19.2MILLION project set to improve a major motorway junction in Somerset is “on budget” and “on target” despite the challenges of the coronavirus pandemic. Somerset County Gazette | News …