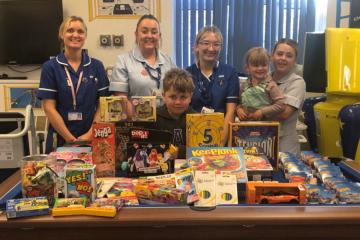 A FAMILY has donated dozens of toys to Musgrove Park Hospital in Taunton to thank staff members for treating their son’s rare neurological condition.

ADEM is an inflammatory condition that affects the brain and spinal cord. Symptoms include nausea, tiredness, and problems with vision.

After his recovery, Toby asked his parents if they could arrange a donation to give something back to the doctors and nurses who helped him.

When his dad Kevin celebrated his 40th birthday, he asked for donations that the Bishopswood-based family could spend on toys to give to the hospital.

After a shopping spree – boosted by the generosity of Tesco in Chard – the family delivered their haul to the hospital’s children’s ward on Monday, October 10.

Sam Keates, Toby’s mum, told the County Gazette that staff members at the hospital were there “at any time of the day or night” to help them through a “terrifying time”.

Toby with a trolley full of toys and games to donate to the children’s ward. Picture: Sam Keates (Image: Sam Keates)

“It’s quite a rare condition that he had so it wasn’t easy to diagnose, but they were really on the ball,” said Sam.

“They were so kind, compassionate and caring. Nothing was too much trouble for them.

“We’re lucky he recovered as quickly and well as he has. It was a really scary time.

“The support we had from the hospital and from his school was fantastic.”

Sam and the family have thanked the doctors and nurses for their treatment, particularly Dr Amy Whiting, the hospital’s paediatric clinical service lead.

“Without her recognising his symptoms and pushing for that diagnosis, I don’t know where we would be,” said Sam.

In total, the family raised £270 to spend on toys, which will benefit families whose children attend Musgrove Park Hospital for treatment in the future.

Sam said the staff members were “over the moon” when the toys arrived.

“The excitement on their faces when they saw everything was great, but the smile on Toby’s face was even better,” she said.

“We’re really lucky to have the people in our lives that we do. The toy donation was all Toby’s idea. He wanted to give something back to the people that changed his life.

“He said it was a really good feeling to be able to help someone in the way that they helped him.”

Nicky and the team at Tesco in Chard donated a basket of toys and colouring equipment to the cause. Picture: Sam Keates (Image: Sam Keates)

Nicky Halsey, community manager at Tesco in Chard, wrote on the store’s Facebook page: “Basket of toys and colouring bits donated to the lovely Keates family. Having had to use the children’s ward at Musgrove Park, they wanted to give something back to them.

“So, when dad celebrated a landmark birthday instead of presents, he received money which they turned into a trolley of toys to which we added a further donation.

“The nurses were very pleased to receive the very kind donation. Well done the Keates!”