The event, set to take place between June 24 and 28, will mark 50 years since it was first held at Worthy Farm, Pilton.

For Louise Medd and her family, the festival has become something of a spiritual and emotional gathering.

Mrs Medd attended the first ever Glastonbury Festival – then billed as Pop Folk and Blues – in September 1970.

But she didn’t attend again until 2015 – and has developed a special relationship with the festival.

“My dad dropped my friend and I off,” she said, recalling her trip almost 50 years ago.

“It was just for the day, because we lived in Chewton Mendip at the time, so we were close.

“I went to the first Glastonbury with my friend Sally, whose parents owned the bakery.

“It was decided we both had respectable parents, so we were allowed to go.

“We were 16. But I remember nothing about it really.

“We wouldn’t have been drinking, we were good.

“I just know we were dropped off at the gate and I know that my father picked us up.”

After that, she decided she ‘didn’t want to go again’ – and never considered it.

“I was married at 20, moved to Burnham when I was 20, and just never thought about it really,” she said.

The incessant nagging of her daughter, Victoria, combined with her son, James Griffiths’ passion for the event, eventually saw her return to Worthy Farm.

James suffered from Marfan’s Syndrome, a disorder of the body’s connective tissues that causes heart defects and often, dislocation of the optical lens.

“James went, I think it was just after his first heart surgery, and I was absolutely petrified of him going,” Louise explained.

“I don’t think I slept until he came home.

“Victoria always felt she’d had a deprived childhood because she’d never been to Glastonbury.

“Then, about five years ago, she registered me as well and I said ‘don’t be ridiculous’.

“But she got me a ticket and I thought ‘what the hell am I doing’?” 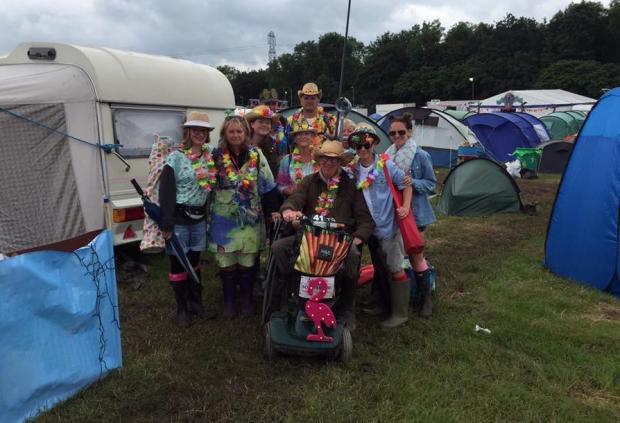 The Family at Glastonbury with James on his mobility scooter

The family attended the festival in 2015 – Louise’s first visit for 45 years.

She was joined by her children – Victoria and James – as well as Victoria’s children, Harrison and Mollie-Louise, and she never looked back.

“James always loved it,” Louise said. “He thought it was ridiculous when we said we were bringing the children too, but when we got there, he realised there were lots of children.”

The 2016 festival followed – and it had become a tradition for the family, even though James often battled illness at the event, with site medical staff and the disabled provision proving an invaluable help.

Then, in early 2017, the family was in turmoil as James, aged just 35, became very seriously ill.

He was insistent he wanted a ticket but they had missed out in the October sale.

For the resale, the following April, the family was at Harefield as James battled his condition in intensive care.

“The October, we didn’t get them and James was just gutted,” said Louise. “We were at Harefield with him when it was the resale and someone got in touch through a page and they had got him a ticket.

“But that was the year he didn’t make it,” she said.

As time wore on, the family decided they had to attend the festival – as it was so special to James.

“I think it helped. We had a bin near our campsite, which someone had painted in memory of James, and I made them bring it up to our campsite.

“I remember one evening sitting up there on my own and I was sat outside, looking across the field with all the lights, and I can remember feeling really sad.

“But it is a very surreal place to be.

“I try not to burst into tears in front of people, I prefer to be private, but it just came over me.

“But it is a very surreal place to be. It’s become a part of the year for the family.”

In the back garden of Louise’s Burnham home is a sculpture, from Glastonbury, which she has hung in memory of James.

TRIBUTE: Louise in her garden with her tribute to James, from Glastonbury

There are also pictures around the house, allowing the family to remember those good times in the fields of Worthy Farm.

Now, almost 50 years after her first visit, and for reasons which may be so different to so many others, Louise and her family have become Glastonbury Festival devotees.

Along with one family member who cannot be there in person.

“It is a special place and I change when I go there,” Louise added.

“It’s bonkers, because I really do become a different person.

“And I thoroughly enjoy it.”

Tickets go on sale on October 3 and 6.

PLANS are underway in Somerset to prepare for a mass Covid-19 vaccination roll out from next week. Somerset County Gazette | News …