A FAMILY who say they were the victims of a national financial scandal in the 1980s has welcomed moves to address their plight in government.

The scheme, much like that employed by John Lewis, saw workers promised shares in the company.

But Mr Gee died suddenly and his successor, Timothy Ingram Hill, had other plans.

The former pheasant plucker moved shares from around 4,000 lower-paid workers into a separate company – which was then sold to a Japanese bank in 1998 for £75m – money the employees would have had a share of had plans operated as intended.

Former Roadchef employee, Paul Pinfold, was working at the Taunton Deane service station when Gee’s vision to create the first company owned by its workers was made public.

After nearly 15 years of working at the Taunton Deane Roadchef, Paul left his supervisor job to utilise his skills as a baker for a large supermarket chain.

Still expecting his sum of the shares after he left, Paul, like thousands of other employees, was left disappointed.

His sudden death came as a complete shock to everyone around him, leaving behind his wife, Sandra Pinfold, 60, and their foster son, Tom, whose name has been changed for this story.

Paul and Sandra had been foster carers for 15 years, looking after a range of children and young people, some with severe additional needs.

Tom, 26, who is blind and has special educational needs, has been living with the Pinfolds for 18 years and requires round-the-clock care.

The couple used to manage their work shifts so that one of them could always be there to care for him – and Paul’s tragic death meant providing that care was going to be very difficult for Sandra alone.

“Money was a real concern after Paul died, and having to care for Tom by myself was a big challenge,” she said.

“There was a time when I thought I wouldn’t be able to care for him anymore, but Paul and I always said we’d be old and grey before Tom ever leaves us. He is the child we never had, and he saw Paul as his father.”

For several years, Sandra had to go down from full-time to part-time at the primary school she worked at to continue giving Tom the home and care he needed.

This resulted in an income just a quarter of what it previously was.

“Tom has always been the most important thing to us, so I’ve done everything I can to ensure he can stay with us,” Sandra said.

“He has a happy life here, that was all me and Paul wanted and I hope to continue that for as long as I possibly can. But what I wish for is to be able to continue to look after him without having to borrow or beg.”

The Roadchef shares were never something the couple had planned on relying on to keep them afloat, but since Paul’s death, Sandra has been in desperate need for what is owed to them.

With the significantly reduced income, Sandra has had to take out a number of long-term loans in order to keep the roof over their head, quite literally.

From replacing the roof of their home, to having essential and ongoing alterations made to ensure their house is safe for a blind person, Sandra knows that outstanding money would be of great benefit to them.

She said: “I’ve had to make a lot of sacrifices to ensure Tom can stay with us, and I wouldn’t have it any other way, but having that money would mean I’m not in debt anymore.

“We only have what’s absolutely essential and necessary, because there isn’t enough money to have or do anything else.”

Sandra is now solely a full-time carer for the 26-year-old, having left her part-time role at the school.

Their only income is the allowance the household gets to look after Tom.

While Sandra is making do with what they have as best she can, she still hopes that one day the family will receive what’s owed.

“Paul always wanted that money to go towards our pensions, because we never accrued that much between us over the years, despite having long standing employment,” she added.

“It’s been more than 20 years since Paul left his job at Roadchef, and we’ve been left behind.

“Now that I’m self-employed, I need that more than ever to help keep our family home going.

“The saddest thing about all of this is that my husband never saw his money before he died. But I know he’d want me to do everything I could to fight for what’s ours, on behalf of everyone else who’s had this stolen from them.

“Let us not see any more lives lost while waiting for what we’re owed.” 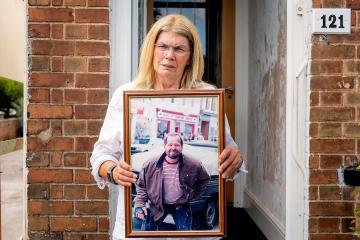 PLANS are underway in Somerset to prepare for a mass Covid-19 vaccination roll out from next week. Somerset County Gazette | News …