THERE are a number of landmarks at Worthy Farm that anyone doing the ‘bucket list’ Glastonbury, or attending for the first of many times, will seek out.

The Pyramid Stage, the Glastonbury sign, the Ribbon Tower – and the Cider Bus.

It’s the obvious meeting point (despite there actually being a meeting point) for thousands of festival goers across the week.

‘I’ll see you at the Cider Bus,’ is a common refrain.

Well, like so many other things at Glastonbury, the Cider Bus doesn’t have to travel far to get to Worthy Farm.

It comes from the Burrow Hill Cider company, at Pass Hill Farm, which has been pressing cider for more than 200 years.

Set in around 180 acres of orchards, it is run by Julian Temperley, whose family has been farming in Somerset for generations, with wife Diana and a long-serving team.

“We have orchards coming out of our ears,” he says during our visit to the farm to talk all things Glastonbury.

It’s a farm – and a firm – steeped in cider-soaked history and tradition, which has managed to move with the times and stay relevant.

This has seen the company move into the market of cider brandy, but the classic pint of cider remains a staple – and Glastonbury is a highlight of the year.

“We don’t know if we’re going yet, that won’t be confirmed until March or April, but we hope to be there,” he says, somewhat downplaying the importance of something like the Cider Bus.

But this hints at the respect he has for festival founder, Michael Eavis, and his family.

“If we sent rubbish cider, and he found out, we would know about it,” he adds. 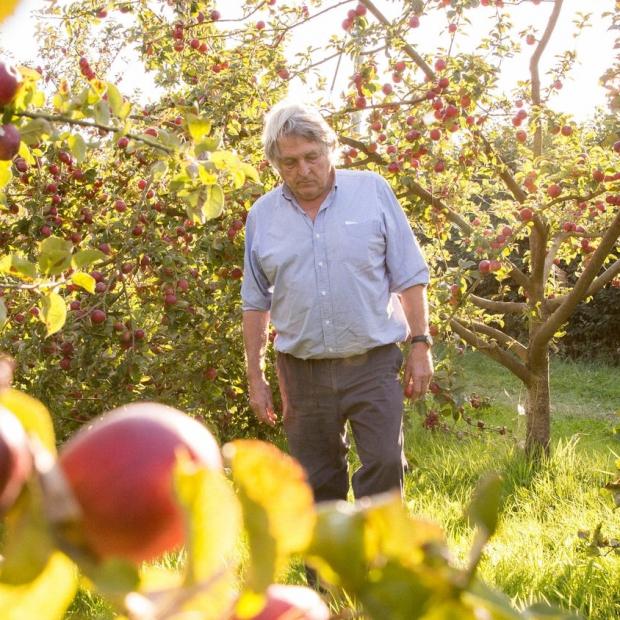 What becomes clear is that respect runs through Julian’s thoughts of Glastonbury – and of the Eavis family – and you suspect the respect of this hardened Somerset stalwart is hard-earned indeed.

“He (Michael Eavis) does try to keep things local,” he continues. “If there’s money to be spent and it can be spent locally, he will.”

Julian says the company has been at the festival in some form since ‘the second one’, 1971, the legendary Glastonbury Fayre, when Andrew Kerr and Arabella Churchill were at the forefront of organising the event, which took place in the week of the Summer Solstice (June 21).

“I remember the first one we went to, halfway through the conversation in his sitting room, his bank manager was on about the money (form the 1970 festival),” he says.

Despite their very different characters, these two long-serving Somerset farmers share many traits; they are warm, but determined, dogged – and darn proud of their county.

And the commitment to – and passion for – the county is at the heart of what appears to be a mutual respect.

“As a Somerset farmer calling on friends of his father’s, he’s gone through the councils, all his problems, and now he’s probably one of the 20 most noticeable faces in England,” Julian says of Mr Eavis.

“Be it us or carnival clubs, he looks at ‘people’,” he emphasises.

“If it was someone like Branson (running Glastonbury), it would be a totally different set of parameters, and so you can only respect what he’s managed to do.”

Burrow Hill takes around 60 people to Glastonbury Festival, including its own cooks and more, in a bid to be self-sufficient on site, and less of a burden on the organisers.

But while that has not changed, the festival itself certainly has, says the man who has seen it develop from the fields since 1971.

And in classic Somerset style, it is the refusal to play by conventional rules that stands out for a fellow farmer.

“People have bought houses nearby (in Pilton) and it sends them mad that there’s this guy who’s internationally famous, walking around in shorts, who plays by none of the rules,” he says, with a wry smile.

“But they can’t compete, because he refuses to compete with them.

“They can’t get on his ladder because however rich they were in the city, it doesn’t count for anything down here.

“Some of them are jealous, but they also know they wouldn’t have any friends without Glastonbury.”

And he sees the impact and benefits the event has for Somerset, not least the money it brings to the county – and the boost it gives a brand like Burrow Hill.

As we pass the company’s two cider buses – yes, there are two, although only one is used for Glastonbury (the other is a pop-up restaurant, believe it or not), the marketing opportunity of the festival comes to the fore.

“Glastonbury is a hugely important PR exercise,” he says. “Very few people in groups we show around here, don’t have a couple who have been to Glastonbury.

“It always surprises you. You make an assumption, you might look at people’s shoes, and it’s interesting how often you can be incredibly wrong.” 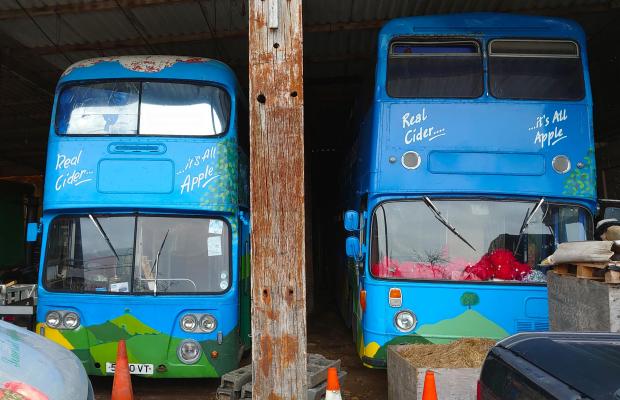 JUST THE TWO OF US: Yes, there are two! The Cider Bus and it’s little brother rest on the Burrow Hill farm

And for someone so steeped in the traditions of British establishment and class, yet so gloriously ‘Somerset’ and aware of his own character, it is interesting to hear someone like Julian talk about the change in the festival, not just in the organisation, but in the people.

“Glastonbury is (now) well-educated, they’re socially mobile, and you can’t – after three days in a tent – immediately work out where they’ve come form, or where they’re going.

“But everyone at Glastonbury is socially mobile. And they reappear.

“It couldn’t have been run by anyone but the Eavises.

“It couldn’t have been run by the Bath & West Committee, it had to be an individual family, even though some of the things they do are contradictory.

“But in actual fact, in the seventies, it used to be bloody dangerous.

“We used to take our own security, heavy guys, but it’s a long, long time since we worried about that sort of thing.

As we leave the farm, taking a glance around at the history in those acres, Julian gives us one last piece of unexpected advice as he waves us off his land.

“Diana Ross will be worth seeing,” he says.

SOMERSET LANDSCAPE: At the home of Burrow Hill

GET YOUR COPY OF THE GLASTONBURY 50 SUPPLEMENT

If you want to get hold of a copy of our Glastonbury 50 supplement – simply click here to place an order and have it sent directly to your home! Thank you!

A MOTORIST who jumped a red light avoided a driving ban to protect the jobs of 12 people he employs. This is The West Country | News …

A CULTURAL venue – with a gallery, restaurant, studios and places to stay – is on track to open this summer. Somerset County Gazette | News …

A CYCLIST sadly died this morning after a collision in Bridgwater – and a 20-year-old has been arrested. This is The West Country | News …

A TAUNTON hospital is set to get a £4.4 million theatre suite – if plans are approved. Somerset County Gazette | News …

TRIBUTES have flooded in for a “fantastic” young man who died in a car crash at an accident blackspot. This is The West Country | News …