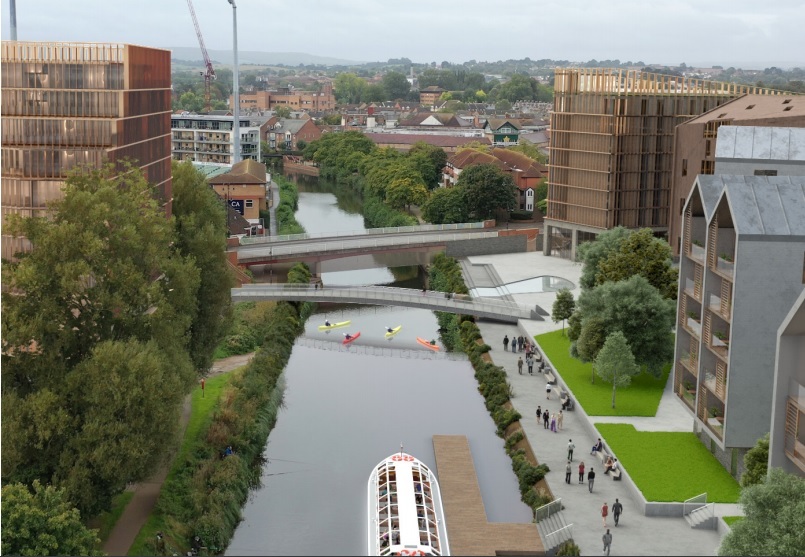 AMBITIOUS ideas for a £1billion transformation of Taunton over the next two decades have been unveiled this week.

The aim is to realise Taunton’s economic potential while reaching a zero carbon goal, maximising the use of previously used land and developing the town as a major business, commercial and educational location.

A document released by Somerset West and Taunton Council looks at ways of overcoming traffic congestion, encouraging less use of private cars and reducing the risk of flooding.

It wants Taunton to build on its garden town status to become “the best place to live, work and do business in the UK” by attracting public and private funding.

Key to the regeneration will be bringing the River Tone back to the heart of Taunton, with riverside living, working and leisure opportunities, building on the multi-million pound Coal Orchard project.

The full Vision 2040 prospectus and a video can be viewed on the council’s website.

Taunton’s Vision 2040 will target businesses, people and investors in the UK and overseas.

SWT leader Cllr Federica Smith-Roberts said: “We are looking beyond the pandemic to a new future for Taunton and Somerset and we hope that this vision will act as a catalyst for our regeneration, unlocking public and private investment.

“Our plan is ambitious and exciting, but also achievable.

“By creating new green infrastructure, celebrating heritage, building modern and connected transport networks and raising design quality we can make Taunton the best place to live, work and do business in the country.”

The prospectus divides the vision into four categories – committed and under construction schemes; opportunity sites; active travel and public realm; and green and blue infrastructure.

The former bus station in Tower Street is likely to hold around 29 homes and a landscaped public area as an extension to Goodland Gardens.

The one-time tax office in Michael Paul House is being suggested as a potential site for 30 flats over three to five storeys.

Gateway Park and Ride could get an electric forecourt, coach transport hub and a hotel.

A planning application has been submitted to replace the current Crown Walk and adjoining High Street properties to provide a covered shopping parade with apartments above.

Around 85 flats in four blocks could be built on Kilkenny Car Park.

Obridge Yard could take 125 semi-detached and terraced homes and flats, with a further 125 flats on West Yard.

The former Volvo showroom in Priory Bridge Road would be able to make way for 60 flats in two blocks.

The former Poundstretcher store in Bridge Street could be replaced by two apartments blocks of three and five storeys housing 30 flats.

A four or five-storey apartment block could be allocated to Tangier Way South, while Units 1 and 2 Castle Street 110 homes could be shared by seven apartment blocks of four to seven storeys.

The Enfield, Castle Street and Tangier car parks would have space for 265 flats or 530 student rooms.

Proposals for Castle Green include a ‘glass box’ on the side of the council-owned Mecca Bingo building to feature a cafe or community space, while through traffic would be barred and the grassed area would be extended and there would be tree planting.

The experiment of opening East Street solely to pedestrians and cyclists could be extended to include Fore Street, while the gardens on The Parade in front of the Market House could be reinstated.

High Street would feature more ‘greening’ with planters, seating and high quality paving, as well as seating area for cafes and restaurants.

COMMITTED AND UNDER CONSTRUCTION SCHEMES:

Multi-million pound projects at Musgrove Park Hospital; the redevelopment of the south side of Taunton Station, along with a multi-storey car park; retirement and extra care flats in Wood Street and Paul Street; the multi-million pound Coal Orchard project featuring flats, shops and restaurants and cafes; the upgrade of Junction 25 and nearby Nexus 25 employment site; 164 flats on the former Tangier Gas Works site; and 230 council homes in north Taunton.

Outline planning permission was granted in March 2019 for the redevelopment of the Firepool North and South sites. The permission was a predominantly retail-led proposal and has not been implemented. The council is putting in place a Local Development Order to guide redevelopment of the site, with a residential-led scheme based on a new masterplan and parameter plans. “The proposed scheme will facilitate the mixed-use redevelopment of this key regeneration site within Taunton town centre, and includes up to 650 new homes, offices, a cinema, a performance venue, restaurants and a hotel, together with associated landscaping, public realm, infrastructure and parking.”

Riverside walks could be constructed at many sites, while a raised riverside path could be built between Morrisons and The Bridge, opposite the Coal Orchard development.

Priory Avenue Roundabout could become a Dutch styled roundabout where pedestrians and cyclists would have priority.

“Evidence based plans and funding are essential to successful delivery,”

It adds: “The ideas presented are ambitious and a clear translation of the vision…will help us sell the possibilities to our community, developers, businesses, funders and occupiers.”

A SENIOR Tory MP has called on Chancellor Rishi Sunak to announce additional support for festivals as part of the Budget next week. This is The West Country | News …

A SHOP housing a butcher and a fruit and veg outlet is opening in Taunton town centre. Somerset County Gazette | News …

PLANS for 140 new homes and a pumping station on a major development site in Taunton have been approved by councillors following a seven-hour meeting. Somerset County Gazette | News …

WHILE investigations into the recent barn fires across Somerset, the fire service are asking farmers to be ‘vigilant’. Somerset County Gazette | News …

A COUNCIL in Somerset could host a Universal Basic Income (UBI) trial, in a bid to beat poverty and equality. Somerset County Gazette | News …

A MAN has been drawing crosses on doorways in what appears to be blood in Taunton. Somerset County Gazette | News …