“I’M coming to Glastonbury, with love.”

That is how a legend announces their appearance at Glastonbury.

And Diana Ross is a legend – and she will be at Glastonbury Festival 2020.

The event, set to run from June 24 to 28, is marking its 50th anniversary and superstar Ms Ross is the first act to be officially confirmed.

She will play in the Sunday afternoon ‘legends’ slot.

“This is a dream come true,” she said on Twitter.

“To all the fans across the world, this is my tribute to you.

“I’m coming to Glastonbury, with love.”

Glastonbury co-organiser Emily Eavis added: “I am delighted to say that one of the all time greats, the wonderful Diana Ross, is coming to Glastonbury to play the Sunday legend slot on the Pyramid next year.”

Ms Ross is considered one of the most successful recording artists and entertainers of all-time, with more than 50 number one hits around the globe and 100 million records sold.

In 2016, President Obama said about Ms. Ross, “she exudes grace, her influence is inescapable,” as he presented her with the Medal of Freedom Honor, the most prestigious award given to a US citizen.

The upcoming performance marks Ms. Ross’ first live appearance in the UK since 2008.

She is known around the world for hits including Chain Reaction and Upside Down. 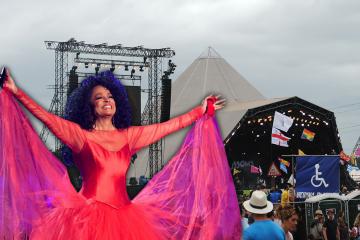